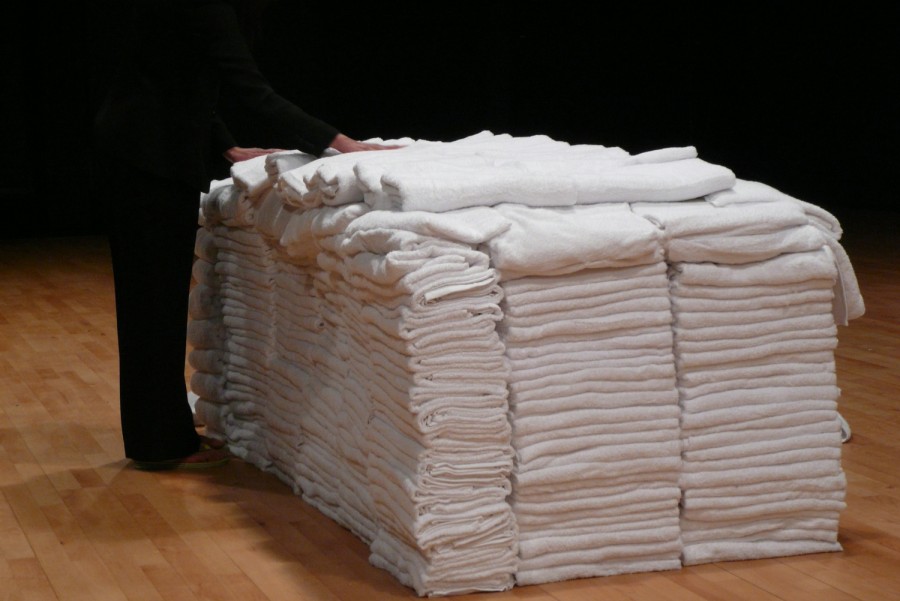 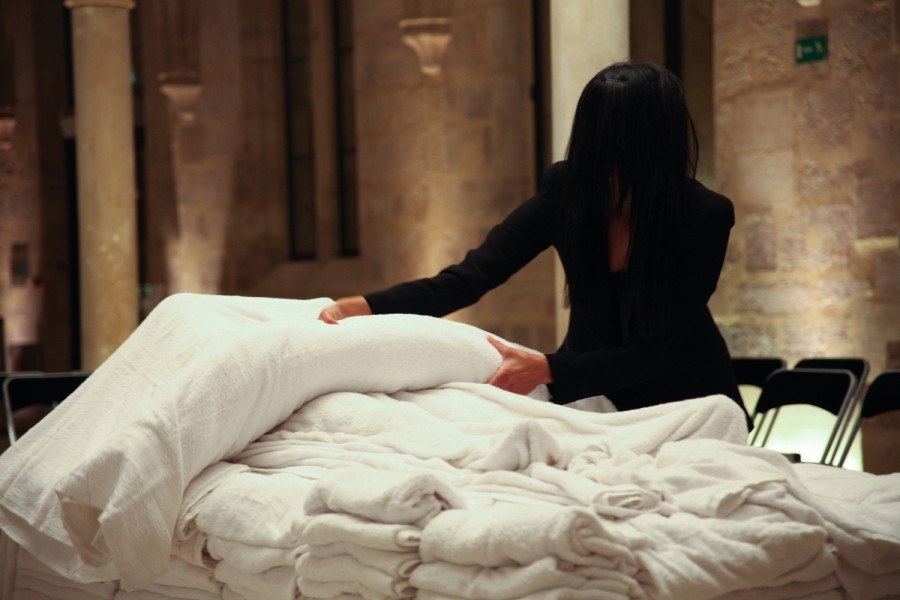 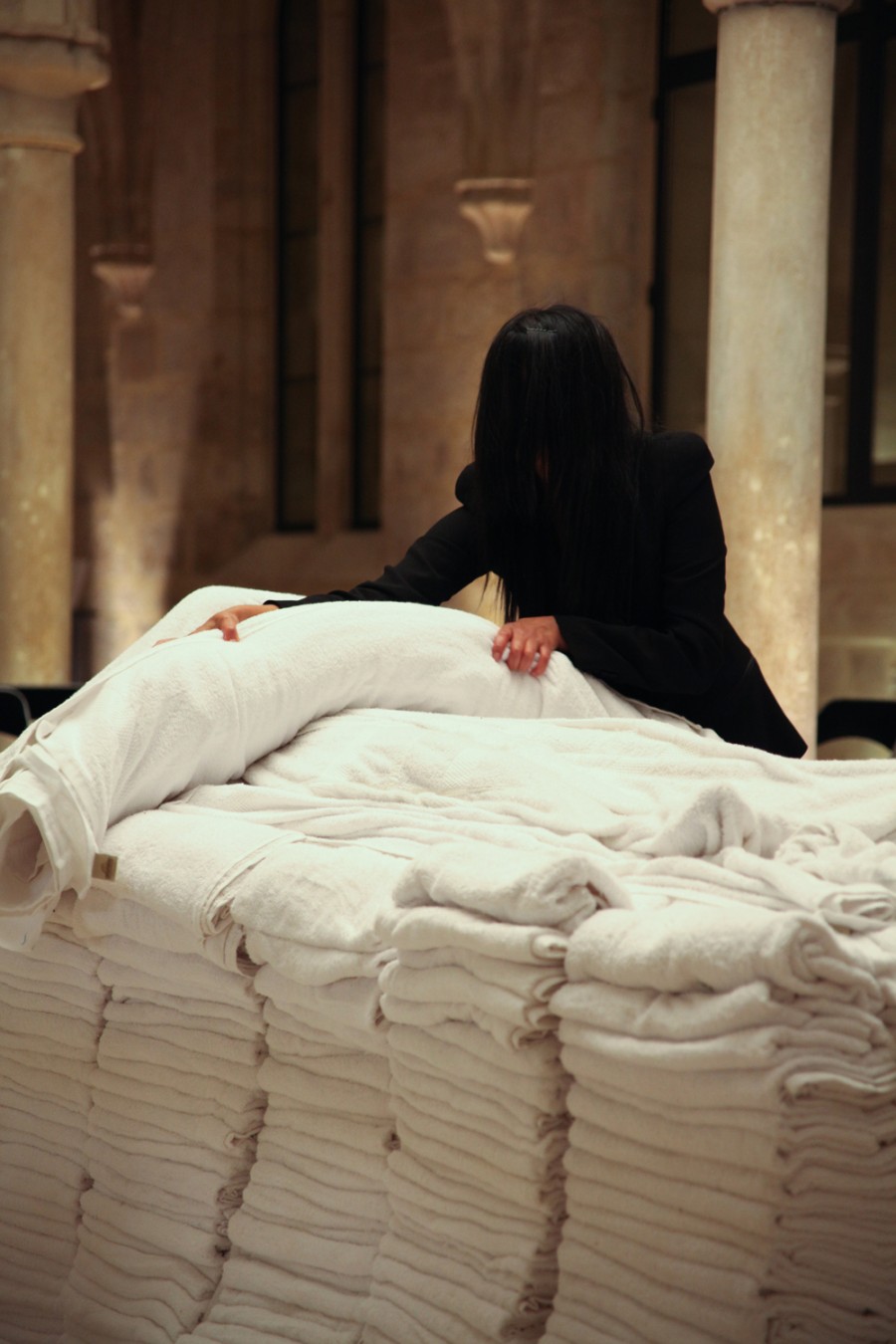 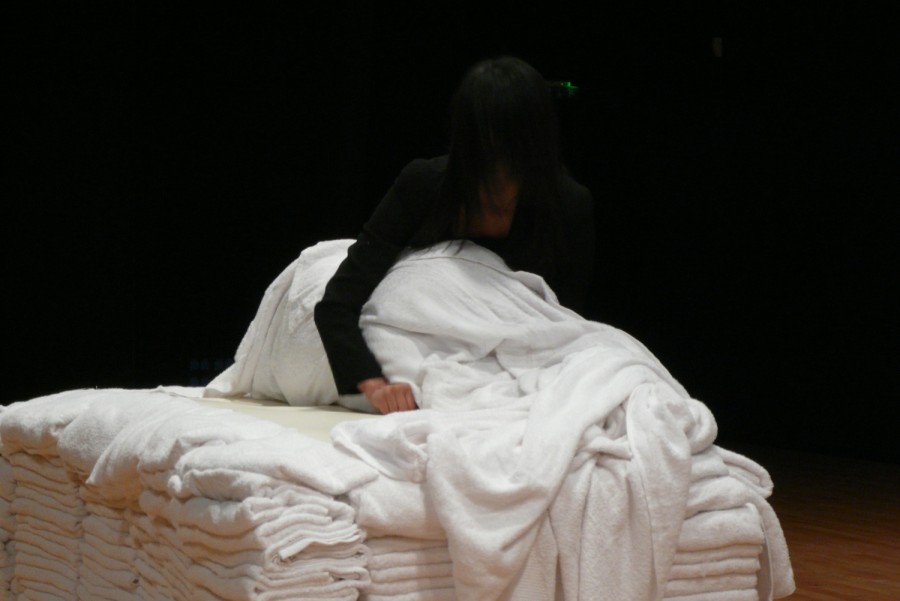 You see an immobile shape under a pile of white towels. Hovering over it, a silhouette is doing something, with small meticulous movements. A servant or perhaps a celebrant, she folds, twists, shakes, sculpts the anonymous mummy like a pile of linen. Then you hear a voice, although its provenance is unclear: a muffled, hesitant voice, neither close nor far, which says, "change the world by changing the quality of one’s own movement." When evoking amateur or revolutionary dance, you must examine the relationship between physical practice, discourse and utopia in 1920’s Germany: what is the value of emancipation, what is its vector for battles, and what place does it assume in the society of its time? You watch a presentation involving words, and in this act of speaking, this use of discourse—rational knowledge becomes stratified, layered, twisted, hollowed out, folded over ; something to be worked over, shaped, revived by certain actions, pressures, movements of covering (up). You are watching two bodies working, triggering and activating each other, reviving a paradoxical space-time continuum in which dance is an activating force. What is La part du rite ("A share in the ritual") in the relationship between the body and the articulated discourse, between art and social transformation? The piece is at once a lecture, a performance, an installation, sounding the connection between flesh and words to reveal zones of emptiness, conflicts, residues, futures. In an ambience of constant tension between manipulation, articulation and disarticulation, a choreographer and a dance theorist seek to connect ideas about states, figures dealing with materials, exploring different aesthetic regimes to question their topicality. Like operators—spoken, disturbed by different layers of movements and references, Latifa Laâbissi and Isabelle Launay awaken a sleepy story, then tuck it in to make it overflow its borders. When paired with Laâbissi’s Écran somnambule, this piece becomes a dialectical object, reflecting the paradoxes of the beginnings of modernity and the invention of a choreographic art simultaneously “a magical power and a critical one,” La part du rite shakes up the archive to awaken its ghosts, offering a montage to the present.