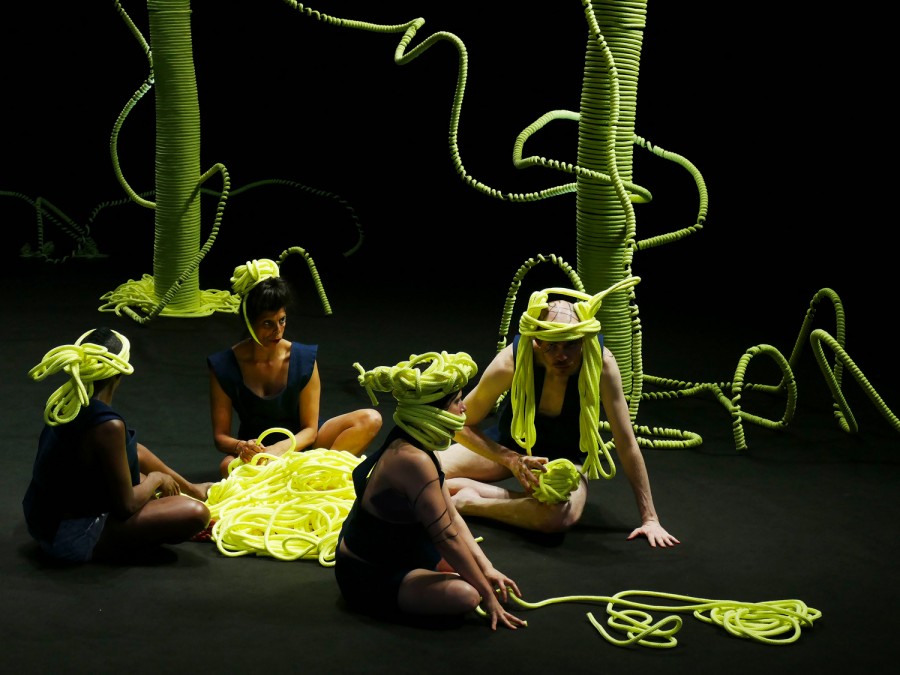 From 2016 to 2019, Latifa Laâbissi is associate artist at the Triangle. The residency program developed is very rich and is articulated between the production and the diffusion of works, a work of meetings and exchanges with the inhabitants of the territory, the district of Blosne, as well as the theater actors and a reflection on training. The detailed program is thought out and discussed each season between the different teams.

For Ruser l’image, Latifa Laâbissi and Le Triangle composed a group of 15 young people from the Blosne district, invited to meet throughout the season with Latifa Laâbissi, in order to discuss and reflect on common concerns close to postcolonial issues. The workshops took various forms, ranging from work on the body, debates, discussions, film screenings … Ruser l’image is a project in motion, engaged with the questions of a multiple and surprising youth. Latifa Laâbissi did not wish to determine in advance the outcome of the project.
It has evolved and built itself over time with young people, from the assumption that anything is possible in art. The choreographer invited them to come with their desires, their images, their dreams, to build a show together. This performative work was resumed in the fall of 2018, when Latifa Laâbissi spoke with a group of young hip-hop dancers from the Triangle.

Presentation of the team Ruser l’image
In 2012, after several years of collaboration with Latifa Laâbissi, our state of indignation and the aspiration for a transformation led us to concretize our desire to create a workspace focused on the manifestation of these realities in the field of art. Ruserimage brings together Mathieu Kleyebe Abonnenc, Lotte Arndt, Patrick Bernier, Olive Martin, Latifa and myself, around common concerns linked to our postcolonial present. A term debated within our group, because its prefix is ​​very often apprehended as going beyond colonial processes (but what about contemporary neocolonialisms?), Where runs the risk of reducing current struggles and realities to this single past, which could translate a form of self-righteous nostalgia, mask the complexity of the present and the differences in situation on a world scale. Bringing us together, artists and theorists, already involved in the deconstruction of these representations, to jointly apprehend urgent questions (flaws in the “republican model of integration”, immigration policies, identity assignment, differentiation, rise of the far right) seemed essential to us, without falling into a simplifying catastrophism. It seems important to us to contribute to the introduction of certain questions into the artistic field in France, to strengthen the latter’s openness to the challenges posed by the new international geographies of art and to discussions on the contributions of cultural theories, postcolonial and decolonial.

Habiter is a solo created in 2007 by Latifa Laâbissi in a intimate space, more specifically in people’s home.
Without changing the space, she invests it and leaves it to the latter to decide whether or not to attend the deployment of its proposal.
As part of her residency at the Triangle, Latifa Laâbissi proposed to reactivate this piece and review its modalities: it will be a duet proposal, where the choreographer will intervene at the inhabitant’s with one of the three dancers of the Triangle invested in this project - Nathalie Salmon, Stanislas Doki and Céline Yavetz.
Two performances with each of the three dancers will take place between February and November 2019.